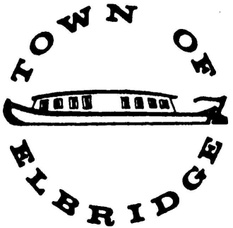 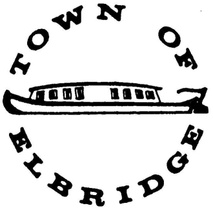 The Town of Elbridge has an estimated population of 6,000 people and an approximate size of 36 square miles. It is located approximately 16 miles directly west of Syracuse and can be reached via the New York State Thruway or New York State Routes 5 and 31 - all major east/ west transportation arteries. The Town includes two incorporated villages which constitute about 2 square miles of the Town's total area: The Village of Jordan - an Erie Canal village and former center of trade and manufacturing- situated in the Northwest section of the Town; and the village of Elbridge located in the Southwest part of Town. The Town of Elbridge was established in the year 1829. According to legend, the Town was named after Elbridge Gerry. He was a member of the Boston Tea Party, a Signer of the Declaration of Independence and the Vice President of the United States from 1813-1814. The Town of Elbridge is not only rich in its history, but also its natural resources. It is a tranquil community nestled in a picturesque glacially formed landscape of rolling hills and drumlins. The Town offers a panoramic view of nature's ever changing seasonal beauty and a precious quality of life. Its central location provides easy access to the nearby Finger Lakes region as well as major sports, recreation, entertainment and cultural centers located in Central New York. While agriculture is still an important part of the local economy, the Town is also home to a variety of retail and restaurant establishments and is experiencing new growth in the light manufacturing and service industries. A trend we hope will continue. So, if you are looking to locate or do business in a community ideal for personal, family, residential development or business growth, it might be in your best interest to consider doing so in the Town of Elbridge.

The Town of Elbridge was first settled by the English in 1793, when Josiah Buck, a surveyor, who originally surveyed the land for the State of New York in 1791, and Captain William Stevens, a soldier of the Revolution arrived in what is now the Town of Elbridge.  Long before the Native Americans had fortified certain areas of the town and had many settlements in the area, a very large one was still in existence on the Seneca River near what is now Jacks Reef. On March 29, 1829, the Town had increased in population, 37 lots were broken from the Town of Camillus and the Town of Elbridge was created.  The town was named after Elbridge Gerry, a friend of Captain Stevens.  Elbridge Gerry was a member of the Boston Tea Party with Stevens, a Signer of the Declaration of Independence and Vice President of the United States in 1813-14.  He died in office on the way to the Senate in 1814. The reason for the early settlement was that Josiah Buck and William Stevens followed a trail which had been used by the Native Americans for centuries and is now the present New York State Route 5.  They found great water power in the Skaneateles Lake outlet, thereby making an excellent place to establish mills which were needed by the people as they arrived to settle the land.  Grist mills and saw mills came first, along with a tavern.  Later stores and doctors arrived in the Town.  In 1800 the first church was organized and in 1801 the first school. There is a large ridge that crosses the middle of the Town from the west to east with Skaneateles Creek cutting through the ridge as it flows to the Seneca River and Cross Lake.  Cross Lake and the Seneca River are our northern boundary and the lake, in legend, was the home of the great Chief Hiawatha. Because of this ridge and the creek, two separate settlements developed on the creek.  The Village of Elbridge in the southwest part of the Town, which in the late 1800's had up to 360 workers in its various factories and mills, incorporated April 1, 1848. The settlement of Jordan in the northwest section of the Town became incorporated on May 2, 1835.  The Erie Canal was built through the Village of Jordan in 1825 and immediately the Village began to grow and prosper.  Later, the main line of the railroad that traversed New York State was built in Jordan.  Jordan soon became the center of trade and manufacturing in the Town of Elbridge - outgrowing the population of Elbridge.  Today Jordan remains the larger of the two villages.  By the early 1900's, the industry in the two villages started moving into Syracuse and many went out of business.  There was a need for capital expansion and there were no banks in the area to support this growth.  In 1912, the Erie Canal was closed and moved to the new Barge Canal which is located in the Seneca River and Cross Lake.  The use of the railroad also disappeared as a popular means of shipping in the 1950's.  The NYS Thruway was soon built, but there was no exit created for the Town of Elbridge-industry came to a standstill.  Today there still exists a few viable industries in the Town:  OWI Wire Mill, Bennett Bolt Works, Northeastern Electronics and Tessy Plastics Corporation. Even though the Town is considered a bedroom community of the nearby Syracuse and Auburn cities, retail businesses along the Route 5 and 31 corridors have done well.  The Town still includes a number of strong family farms, as well as the historic districts of yesteryear.

COMPLETE RECORD AS REQUIRED BY CHAPTER 690, OF THE LAWS OF 1865 RELATING TO OFFICERS, SOLDIERS, AND SEAMEN, COMPOSING THE QUOTAS OF TROOPS FURNISHED TO THE UNITED STATES BY THE TOWN OF ELBRIDGE, COUNTY OF ONONDAGA .

In the war of Rebellion, and covering the period from the 15th day of April 1861, to the date of the certificate of the Town Clerk, below.

Town of Elbridge History and It's Villages

You Grew Up in Jordan if you Remember...

Items available for purchase from the Town Historian (docx)

Surnames of all Town of Elbridge Residents

The Town of Elbridge wishes to extend to our community it’s sincere sympathy in the recent passing of "Jack" John G. Horner, our longtime town Historian and beloved member of the Town of Elbridge Community. He was a wealth of information and will be deeply missed by all who knew him and all the people he helped answering questions of family and places in the town and surrounding areas.